Late on June 10, 22-year-old Christian Glass called 911 after experiencing problems with his vehicle in Clear Creek County. An hour or so after law enforcement officers arrived on the scene, a deputy shot him to death.

The incident in Silver Plume received relatively little coverage in the days that followed. But that changed on September 13, when Glass’s parents, Simon and Sally Glass, appeared alongside attorneys from Denver-based Rathod Mohamedbhai LLC to announce their intention to file a wrongful-death lawsuit and demand prosecution of the many officers involved; officials from the Clear Creek County Sheriff’s Office, Idaho Springs Police Department, Georgetown Police Department, Colorado State Patrol and Colorado Division of Gaming had responded to the call.

According to Glass family attorney Siddhartha Rathod, body-worn camera videos shared at the announcement prove that the assorted cops committed tragic errors in judgment resulting in a wholly unnecessary death. “It’s not difficult to determine what needs to happen here,” Rathod says. “These officers need to be held criminally responsible. They need to be criminally charged with Christian’s death.”

The Glass family moved to the U.S. from New Zealand when Christian was ten and eventually settled in Boulder. Rathod acknowledges that Glass sometimes struggled with mental health and had a knife in his possession when the fatal shots were fired. But he was inside his vehicle alone with the windows rolled up, at least until officers busted in, and Rathod contends that they were not at risk.

“On one of the videos, the Georgetown chief of police flat-out says, ‘Christian, you don’t scare me,'” he points out. “And seconds before Christian was murdered, three of the officers are laughing.”

The original Clear Creek County Sheriff’s Office release about the fatal episode is matter-of-fact. It states that at about 11:21 p.m. on June 10, the office’s communication center received a “motorist assist” call from an individual on the 600 block of Main Street in Silver Plume. Upon their arrival, deputies found “an adult white male” (Glass hadn’t been identified yet) who “appeared to have been involved in an accident” and “immediately became argumentative and uncooperative with the deputies and had armed himself with a knife.”

When Glass didn’t quickly leave the vehicle, additional law enforcement officers were called to the scene “and for over an hour tried to bring the situation to a peaceful resolution,” the release continues. “Deputies were able to break out the car windows and remove one knife,” but because Glass was still in possession of a second knife and a rock, they subsequently “deployed less-lethal bean bags and Taser with negative results.” Finally, Glass was fatally shot after he allegedly “tried to stab an officer.”

The account offered by Rathod has little in common with the official version. 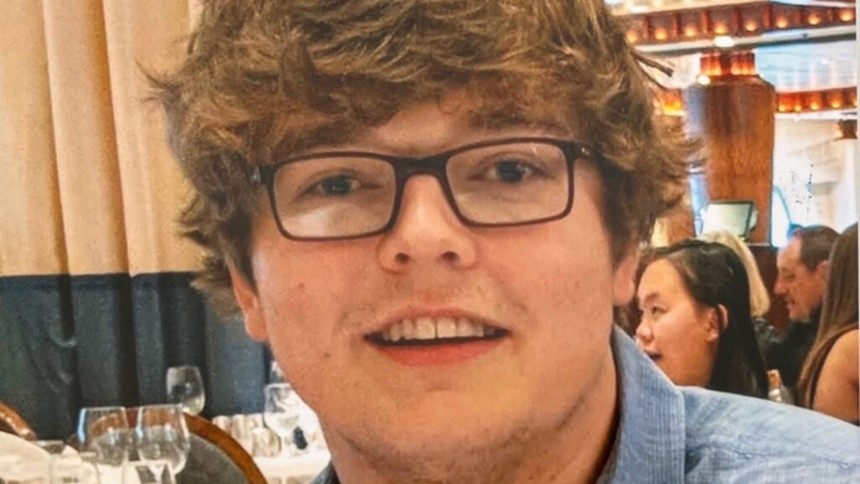 A portrait of the late Christian Glass.
Rathod Mohamedbhai LLC

As for the knives, “Christian had self-identified in the 911 call that he had them,” Rathod continues. “When the operator asked, ‘Do you have any weapons,’ he said, ‘I have two knives, a hammer and a rubber mallet’ — geology tools he used for finding rocks. He said, ‘I’ll throw them out of the window if that will make the officers feel safe.’ And when the officers arrived, he had his hands up and waved at the officers. He offered to throw the weapons out of the car and they started screaming at him and said, ‘No.'”

The videos reveal that “Christian was scared” by their reaction, Rathod contends. “He was terrified and in crisis. The first time he picks up a knife, the officers are standing outside the window, and as they draw their guns, he throws it across the car and covers his mouth in fear. And Christian had committed no crime. There was no reason to continue the contact, and if the officers were afraid of a person holding a legal knife in a car with the windows fully up, they should have done what every police expert tells them to do: seek cover, distance and time. You don’t stand right next to the threat, but they did, which just demonstrates that there really wasn’t a threat.”

After a deputy broke out one of the vehicle’s windows, Rathod continues, “Christian responded by picking up the knife — and they shot him six times with bean bags, which is the equivalent of being repeatedly punched as hard as humanly possible. They blew out the back window and tased him several times, causing him to slash with the knife in pain and panic — and that’s when the officer shot five times and killed him.”

Below is a compilation of body-camera video that Rathod warns “is one of the most shocking videos we’ve ever seen”:

The crisis that developed after Glass’s initial outreach to authorities was entirely manufactured by law enforcement officers, Rathod believes, since legally, “a police officer may not create their own exigent circumstances.” He adds: “This was a failure of policing every step of the way, from their tactics to command and control to their use of force.”

Colorado Bureau of Investigation spokesperson Susan Medina confirms that “this incident remains under investigation. Following an initial presentation of the case made to the 5th Judicial District Attorney’s Office, CBI Investigative Agents continue to provide additional follow-up to enable the DA’s Office to conduct a full assessment of the facts related to the incident.”

In the wake of the Glass press conference, 5th Judicial District DA Heidi McCollum released this statement: “We are working diligently to thoroughly review the evidence in this case. When a peace officer shoots and wounds or kills a person in Colorado, there are specific protocols to investigate and review such matters. This office is required to issue a report or to present the case to a grand jury to further investigate or decide if indictments should issue. I will release my decision on the action this office will take as soon as the review process and a complete and thorough investigation is completed. While we understand that public sentiment may desire this process to move at a more rapid pace, it is not in the interests of justice and fairness to the family of the victim for this matter to be rushed to a conclusion.”

McCollum stresses that she has been in contact with the U.S. Attorney’s Office for the District of Colorado, the Justice Department’s Civil Rights division and the FBI Denver division in regard to the case, and says she will “continue to offer open lines of communication with these agencies, as well as with the Colorado Bureau of Investigation, throughout the pendency of this case.”

Clear Creek Undersheriff Bruce Snelling, speaking for his office, offers this: “We are unable to comment at this time, since this is an open, ongoing investigation.”

Investigators working for McCollum “have met with the family, and we encourage the district attorney to bring charges,” Rathod says. He predicts that “this case will shock the conscience of the nation.”

The section of the Rathod Mohamedbhai website devoted to the Christian Glass case includes additional videos, the autopsy report and more. Continue to watch the September 13 press conference:

To view the article in it’s entirety, visit www.westword.com