SILVER PLUME, Colo. — A man shot and killed by a Clear Creek County sheriff’s deputy in June appeared to have been experiencing a mental health crisis at the time of the shooting, according to body camera video provided by the victim’s family attorney.

The video also raises questions about police tactics used during the 70-minute encounter between 22-year-old Christian Glass and officers from several agencies that responded to the scene on the night of June 10.

Glass had crashed his car into a bush, getting it stuck, on a road in Silver Plume and called 911 for help. During the encounter, deputies and officers from several agencies tried to persuade Glass to exit his vehicle, but he wouldn’t, saying he was terrified.

In the video, responders said they were concerned about two knives, a hammer, a rubber mallet and rocks he had in the car. Over the course of the response, a Clear Creek County deputy held Glass at gunpoint, broke his window, fired bean bag rounds at him, used a Taser on him and fired five shots, killing him.

WARNING: The following video contains content that may be disturbing to some viewers, including gunshots, violence and graphic language.

Glass is seen with his hands in clear view on the dashboard for the majority of the video, at times directing a heart-shaped hand gesture toward deputies and officers outside the car. After an encounter where guns are drawn about six minutes in, officers and deputies calmly talk to Glass.

Near the end of the encounter, seemingly frustrated that Glass isn’t coming out of his car, a Clear Creek deputy is authorized to break the passenger window of the truck. Glass then picks up a knife.

That same deputy deploys a Taser, which hits Glass through the smashed passenger-side window.

The video appears to show the marshal of the Georgetown Police Department reaching inside the vehicle behind Glass. When he does, Glass turns and moves an arm in his direction, and that same Clear Creek deputy who deployed the bean bags and the Taser fires five shots at Glass.

“Industry best practices in law enforcement, we recommend that officers just leave the scene. Walk away from this scenario,” said Ed Obayashi, a sheriff’s deputy in California who is the lead trainer for use of force in that state.

Obayashi investigates police shootings across the country. He reviewed the video in this case to provide analysis for 9NEWS.

“Once they decided to force entry – break a window – it was predictable that this event could most likely unfold the way it did,” he said. “It’s predictable in law enforcement that that is going to provoke some type of negative unfortunate response, and we’ve seen it time and time again.”

Glass called 911 that night saying his SUV was stuck on a road in Silver Plume.

In the 911 call, also provided to 9NEWS by Glass’s family, Glass is audibly paranoid, claiming skin-walkers – witches in Navajo culture – were trying to ambush him.

He claimed he had recently had a spiritual awakening and said he had come out of a 10-year-long depression. He told the dispatcher that other vehicles on the highway were out to get him.

Even before any responders arrived on scene, Glass told the operator he was scared, terrified. He told her he saw people outside his car and that they were coming in and out of sight.

WARNING: The following video contains audio that may be disturbing to some viewers.

“He sounded like he had some sort of a mental illness,” said 9NEWS Psychologist Dr. Max Wachtel, who also reviewed the video and 911 call for 9NEWS. “It certainly could have been drug-related. The 911 dispatcher wouldn’t know that. It sounded to me like a delusional disorder or a delusion that’s part of a psychotic disorder like schizophrenia.”

He told the 911 call taker he would throw the knives out the window when deputies arrive to make them feel safe. Before they get there, Glass tells the operator if he gets out of the car, he might be in danger.

In the video, two Clear Creek County deputies arrive on scene and immediately ask Glass to step out of the car. Glass tells the deputies he’s terrified. He repeats his offer to throw the knives out the window to make them feel safer, but one of the deputies declines and continues to order Glass out of the car.

Glass tells officers he needs a push to get his car free and that he would follow them to the police station if they wanted to talk. 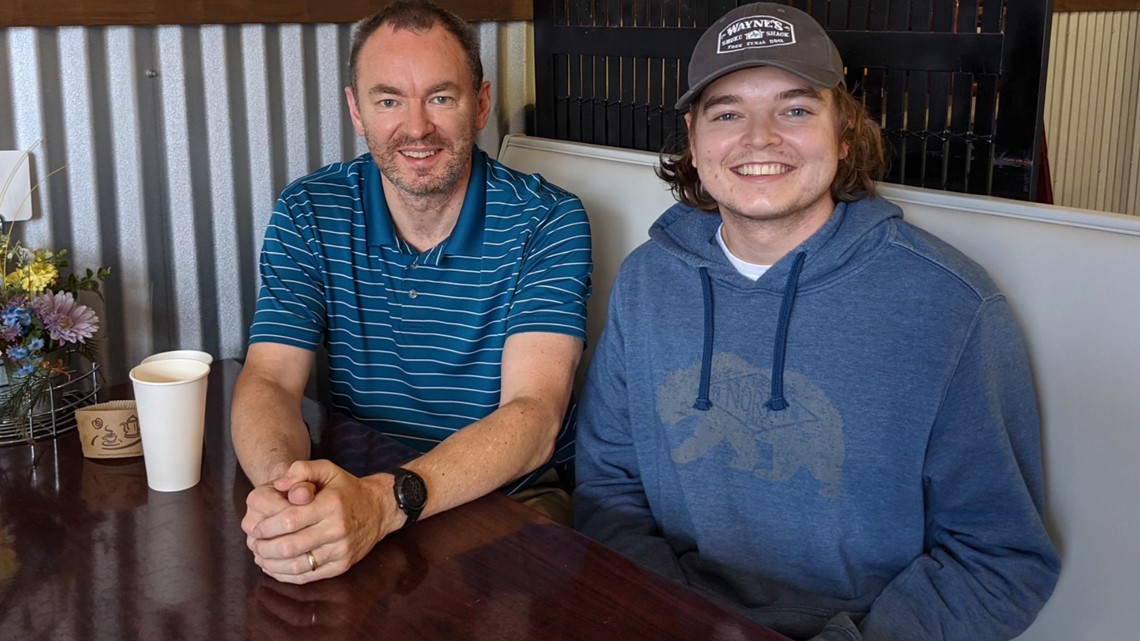 Credit: AP
This image provided by Sally Glass shows her son Christian Glass, right, sitting with his father, Simon Glass, in Colorado on March 11, 2021. Family members are asking for accountability in the death of Christian Glass, a 22-year-old Colorado man who was shot by police earlier this year after calling 911 for roadside assistance. Christian Glass’s parents believed officers escalated a situation that could have been handled differently, and hope the district attorney will bring criminal charges. (Sally Glass via AP)

In the first six minutes of the call, a deputy threatens to break Glass’s window and, when he sees a knife in Glass’s lap, pulls out a handgun and holds Glass at gunpoint. Glass throws the knife into the passenger seat, and shortly after, the deputy puts his gun away.

“That is not the way to handle it, whether it’s drugs or it’s something organic, like a schizophrenia or a delusional disorder – coming at the person hard and aggressively, that is only going to make the situation worse,” Wachtel said.

At the beginning of the call, responding officers and deputies go back and forth, with one wondering whether Glass is “on something.” Another mentions in the first 10 minutes of the video that he doesn’t know if it’s “a psych issue or what.”

Over the next 60 minutes, more officers arrive and attempt a calmer approach to get Glass out of the car.

An Idaho Springs Police officer calmly tries to engage. Glass, whom his family attorneys describe as an amateur geologist, shows the officer a heart-shaped rock he said he purchased in Moab. Still, he refuses to step out of the car.

The Georgetown Police marshal calmly talks to Glass, offering food, soda and cigarettes. He also offers to call family for Glass, who still refuses to leave the car.

“Can you ask Clear Creek what their plan is? If there is no crime, and he’s not suicidal, homicidal or a great danger, then there’s no reason to contact him. Is there a medical issue we’re not aware of?” the sergeant asks.

The trooper responds “no,” and repeats to one of the responders on scene that his sergeant “said there is no point in contacting him if he is not a harm to himself or anyone else.”

Less than a minute after this interaction, knocking can be heard as officers and deputies ask Glass to get out of the car. This is about 20 minutes before the shots fired call.

Near the end of the video, police, seemingly frustrated that the call is taking so long, decide to break Glass’s passenger window. They spend a few minutes discussing the best method.

An off-site member of the Clear Creek County Sheriff’s Office approves the move over the radio, and a deputy breaks the window.

“There’s only three ways law enforcement officers can get inside a vehicle,” Obayashi said. “It’s by consent, which we obviously don’t have here. A warrant, which we don’t have here. The third basis is if there’s an exigency. Is there some sort of emergency that officers have to get in the vehicle? And there certainly is no exigency here in my opinion.”

Obayashi said he doesn’t see or deduce any crime from watching the video.

“One of the primary issues is going to be whether the officers actually provoked this matter by breaking the window,” he said.

Wachtel weighed in on the decision-making as well.

In the video, Clear Creek County Deputy Andrew Buen, who initially responded to the call, held Glass at gunpoint, broke his window, fired bean bag rounds at him, used a Taser on him and fired five shots, killing him.

After Glass is shot, he appears to slash at himself with the knife before becoming motionless.

A spokesperson for the Colorado Attorney General’s Office said they are aware of the shooting but can’t comment at this time.

Interviewed by an investigator on video immediately after the shooting, Buen said that after Glass was Tased, he heard him threaten to kill officers. He said he fired the shots out of fear for the Georgetown Police marshal, who was reaching into the vehicle when Glass appeared to swipe the knife toward him.

“There was no need to threaten him with force, to draw guns, to break his car window, to fire beanbag rounds from a close distance, to Tase him, to shoot him dead. From beginning to end, the officers on scene acted unconscionably and inhumanely,” Glass’s family attorneys, the Rathod Mohamedbhai law firm, said in a statement.

A spokesperson for the Clear Creek County Sheriff’s Office did not respond to 9NEWS questions about the shooting by deadline on Monday.

In a statement Tuesday afternoon, the 5th Judicial District Attorney’s Office said they along with the Colorado Bureau of Investigation were reviewing the incident.

“We are working diligently to thoroughly review the evidence in this case,” said Heidi McCollum, 5th Judicial District Attorney. “When a peace officer shoots and wounds or kills a person in Colorado, there are specific protocols to investigate and review such matters. This office is required to issue a report or to present the case to a Grand Jury to further investigate or decide if indictments should issue. I will release my decision on the action this office will take as soon as the review process and a complete and thorough investigation is completed.

While we understand that public sentiment may desire this process to move at a more rapid pace, it is not in the interests of justice and fairness to the family of the victim for this matter to be rushed to a conclusion.”

The DA’s office also said they’ve been in contact with the U.S. Attorney’s Office for the District of Colorado, the Justice Department’s Civil Rights Division, and the FBI Denver Division regarding the case.

To read the article in it’s entirety, visit www.9news.com